YOU’D BE NUTS TO
TRUST YOUR TREES TO
ANYONE ELSE!

Insects and diseases pose two of the most serious threats to your trees in North County, San Diego.

Insects and diseases can quickly turn your trees from assets into liabilities if not monitored. Tree Barber uses a comprehensive approach to managing insects and diseases that start with maintaining proper tree health, including pruning and creating ideal soil conditions. The healthier your trees are, the less chance of insect or disease damage.

Tree Barber’s ISA Certified Arborist is thoroughly trained in diagnosing and treating these problems. Although we are certified and licensed to treat these issues through spraying and trunk injection methods, we are environmentally conscientious and apply only when necessary.

We are licensed by the State of California Department of Pesticide Regulation.

Trees can become infected with diseases just like people. There are many different bacterial and fungal diseases that can cause damage to the health of your trees. Diseases are often more damaging because they sometimes affect the water and nutrient functions of the tree, which can cause further damage to the surrounding landscape.

Three things are required for a disease to develop:

Plants vary in susceptibility to pathogens. Many disease-prevention programs focus on the use of pathogen-resistant plant varieties. Diseases can be classified into two broad categories:

Examples of infectious agents include fungi, protozoa, viruses, and bacteria. Non-infectious diseases, which account for most plant problems in urban areas, can be caused by compacted soil, nutrient deficiencies, temperature extremes, vandalism, pollutants, and fluctuations in moisture. Non-infectious disorders often produce symptoms similar to those caused by infectious diseases; therefore, a Certified Arborist needs to distinguish between the two to determine appropriate treatment options. 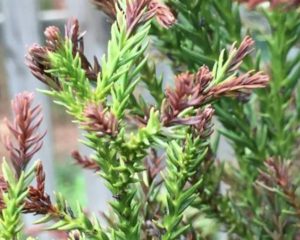 Symptoms usually appear during the summer months; typically, the disease only affects one-year-old foliage. Common symptoms include browning of needles and eventual needle drop. Passalora needle blight symptoms start on lower branches near the trunk and then spread outward toward branch tips. The loss of foliage extends upward and outward from year to year. In severe cases, the entire tree will turn brown except for the new growth at the tips of the branches. Brownish spores develop during late spring to summer on infected foliage. 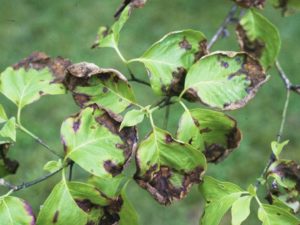 Anthracnose is a general term for a group of hardwood diseases that cause lesions on leaves, twigs, and fruits. The fungi responsible for anthracnose are Gloeosporium spp., Gnomonia spp., and Apiognomonia spp. Hosts include a wide variety of hardwoods. Common hosts include oak, maple, sycamore, ash, walnut, and dogwood. Symptoms vary with species, but the most apparent symptoms are the leaf lesions produced in the spring and expanding throughout the summer. Lesions often begin as pale green or greenish-grey blotches but then turn yellow, tan, reddish-brown, or brown. Some trees respond to infection by prematurely shedding leaves (e.g., sycamore and ash), while others retain their leaves until the leaf drop in the fall (e.g., oak). In sycamore, the fungus can grow out of leaves into adjacent twigs where it causes small cankers, shoot dieback, and witches brooms or deformed twigs. 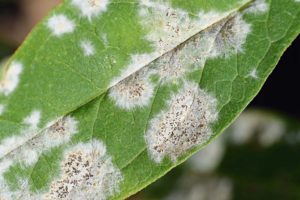 This fungal disease attacks several southern pine species but is most damaging on slash pine (Pinus elliottii) and loblolly pine (Pinus taeda). Oaks, such as water oak (Quercus nigra), willow oak (Q. phellos), and southern red oak (Q. falcata), serve as critical alternate hosts for this disease but do not sustain any damage. The most apparent infection symptom on pine is the formation of a spindle-shaped gall on a branch or main stem. The gall may be pitch-soaked and occasionally exude sap. Bright orange spores are often produced on the gall surface during the cool spring months. These aeciospores are blown off by the wind and serve to infect oak leaves. On oak, symptoms are limited to small leaf spots that may be chlorotic or necrotic. A critical diagnostic characteristic of oaks is the bright orange spores (urediospores) produced on the underside of the leaf. 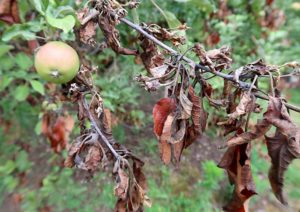 Fire blight is a disease caused by the bacteria Erwinia amylovora. More than 100 species of plants are susceptible to fire blight; all are in the Roseaceae family. Trees susceptible include apples, hawthorns, pears, and mountain-ash. The disease can also occur (but is far less common) in the stone fruits: peach, cherry, and plum. Blighting flowers is usually the first symptom to appear in spring. Flowers will darken, droop, wither, and turn black. The tips of infected shoots will also droop, turn black, and bend over into a shepherd’s crook shape. If many nodes are infected, trees will appear burned or scorched, hence the name “fire blight.” Cankers may form when the bacteria infect branches and stems. Bark on cankers may appear raised and slightly blistered, especially when cankers are actively expanding during the growing season. Cankers can eventually girdle and kill branches or the entire tree. Bacteria may be visible oozing from or near infected plant parts during warm, humid weather. Armillaria root rot is a general name for a group of diseases caused by fungi of the genus Armillaria, most commonly A. mellea and A. ostoyae. They are pathogens of hardwoods, conifers’ roots, and lower stems and are important decomposers of dead trees.

The symptoms of Armillaria root rot often resemble many other diseases and disorders of trees, such as drought, decline, Hypoxylon canker, Annosus root rot, and Phytophthora root rot. Common above-ground symptoms include growth reduction, chlorotic or scorched leaves, early fall coloration, premature leaf drop, branch dieback, wind throw, and tree death. Conifers may produce large crops of undersized cones during the tree's decline. Trees are often affected in groups. Armillaria causes cankers (lesions) on the inner bark and outer sapwood on the root-crown and lower stem. After a tree dies, the fungus colonizes and decays sapwood. Cankers may expand slowly and eventually kill large roots; entire branches are not usually wholly girdled, but large lesions may cause dieback or death. 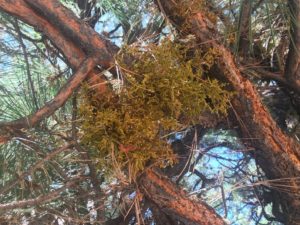 Mistletoe is a perennial, broad-leafed, evergreen plant that parasitizes many species of hardwood trees, most commonly oaks and hickories. Heavily infested trees may be reduced in vigor, stunted, or even killed, especially if other factors stress them. Leafy mistletoe has opposite evergreen leaves and rounded growth habits, reaching approximately 2 feet wide. The presence of green stems and thick oval-shaped mistletoe leaves is the only reliable sign of an infestation. Identifying an infestation is easier to observe in the winter when all the leaves are off the host plant. Inconspicuous flowers produce small, sticky, whitish berries in the fall.

We use cookies on our website to give you the most relevant experience by remembering your preferences and repeat visits.
By clicking “Accept”, you consent to the use of ALL the cookies. AcceptReject
Manage consent

This website uses cookies to improve your experience while you navigate through the website. Out of these, the cookies that are categorized as necessary are stored on your browser as they are essential for the working of basic functionalities of the website. We also use third-party cookies that help us analyze and understand how you use this website. These cookies will be stored in your browser only with your consent. You also have the option to opt-out of these cookies. But opting out of some of these cookies may affect your browsing experience.
Necessary Always Enabled
Necessary cookies are absolutely essential for the website to function properly. These cookies ensure basic functionalities and security features of the website, anonymously.
Functional
Functional cookies help to perform certain functionalities like sharing the content of the website on social media platforms, collect feedbacks, and other third-party features.
Performance
Performance cookies are used to understand and analyze the key performance indexes of the website which helps in delivering a better user experience for the visitors.
Analytics
Analytical cookies are used to understand how visitors interact with the website. These cookies help provide information on metrics the number of visitors, bounce rate, traffic source, etc.
Advertisement
Advertisement cookies are used to provide visitors with relevant ads and marketing campaigns. These cookies track visitors across websites and collect information to provide customized ads.
Others
Other uncategorized cookies are those that are being analyzed and have not been classified into a category as yet.
SAVE & ACCEPT